The KFC in Cloverdale has been reported to have mice. According to the Putnam County Health Department’s inspections that occurred in January, the Cloverdale KFC has only a single critical hit. The hit came after an inspector observed evidence where mice had been in a cabinet under the drink station in the dining area.  Other establishments  results from Health Department’s  inspections include Days Inn in Cloverdale with 2 critical hits and 1 non-critical hit, the Taco Bell in Greencastle had 1 critical hit, and Ashley Square had 1 critical hit and 1 non-critical. To view the full report you can check it out in this article below. 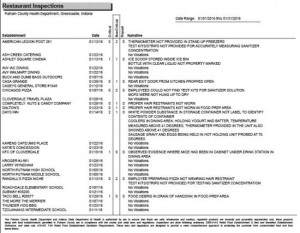