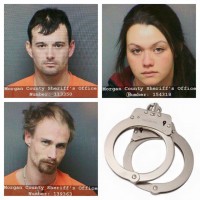 A traffic stop by the Martinsville Police Dept. resulted in the arrests of three subjects. A K9 Unit from the Morgan Co. Sheriff’s Office alerted to the presence of narcotics in the suspect vehicle. A search of the vehicle produced over 6 grams of suspected methamphetamine as well as other drug paraphernalia. Andrew James, Jade Reed and Joshua Fulk were arrested and are being charged with several drug related offenses.