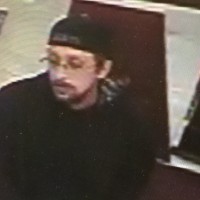 On December 17, 2015 at approx. 1:30 p.m. a male subject wearing a dark colored hat and dark sweat shirt walked into the Marathon Gas Station to use the phone.  He then called in a bomb threat to Florida State University. The subject then drove to the Country Mart in Fillmore, and called in another bomb threat to Florida State University. Sgt. Wooten with the Florida State University Police Department contacted Sgt. Ed Wilson with the Greencastle Police Department asking for help in locating the person that made the calls. Sgt. Wooten explained that is a lot of time and resources that go into place when a bomb threat is made and they were willing to come and pick up the suspect on charges in Florida. The Greencastle Police Department posted pictures of the male subject on the Greencastle Police Department facebook site and received numerous tips following up on each tip as they came in. One tip lead officers to Brandon Wingler age 28 of Amo (Hendricks County). He was interviewed by Detective Michael Collins and later taken to the Putnam County Jail pending review from Prosecutor Tim Bookwalter. The Greencastle Police Department would like to thank Sgt. Ed Wilson, Prosecutor Tim Bookwalter, Chief Deputy Justin Long, Detective/Sergeant Michael Collins, Asst. Chief Brian Hopkins and 911 Dispatcher Meghan e for all the hard work they put in solving this case.