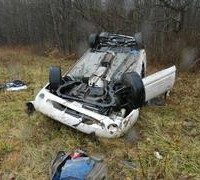 This morning at 8:36, Indiana State Police and Putnam County emergency agencies responded to a one-vehicle rollover crash in the westbound lanes of Interstate 70 near the 30 mile marker. Unsafe speed appeared to be the cause of the crash with driver impairment a contributing factor.

Preliminary investigation revealed a 1998 Ford Contour passenger car was westbound on Interstate 70 and lost control on the wet pavement, ultimately traveling off the north side of the roadway and rolling over. The driver and passenger were transported to Terre Haute Regional Hospital for serious injuries, but believed to be non-life threatening. The duo is believed to have been en route from Ohio to Missouri for the holiday.

The driver was 23-year-old Timothy Rich of Sikeston, Missouri. Rich suffered head and facial injuries and is reportedly admitted to the hospital. Rich also tested positive for Marijuana and various charges are pending against Timothy Rich. Approximately two grams of Marijuana were found in the vehicle after the crash.

The passenger was 21-year-old Deshion Johnson of Sikeston, Missouri. Johnson suffered head and ankle injuries and is reportedly admitted to the hospital.