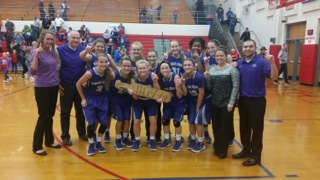 It took two overtimes and some great effort, but the Greencastle Tigers Cubs won the Putnam County girls’ basketball tournament, 55-54 over the South Putnam Eagles. Bethanie Burgeson hit a three-pointer with no time left on the clock to win the game in the second overtime.

Greencastle was down by nine in the third quarter but came back to tie it at the end of the quarter and tied in the fourth.

It looked like Greencastle was going to win in the first overtime up by 7 with 59.4 seconds remaining. South Putnam had other intentions. They scored seven unanswered in the final minute capped off by Jessica Modglin after she rebounded a missed free throw and laid it back in with no time left.

In double OT South Putnam controlled the tempo and had a chance to make it a three-point game with five seconds left. Lillie Stein had two free throws but she only made one of the two. Aubrey Barker took the ball up the court for the Tiger Cubs and found Burgeson on the right elbow and with no time left she buried the three for the win.

This is the third straight year the Tiger Cubs have won the tournament.