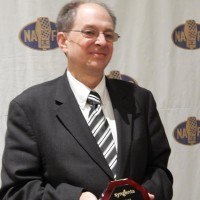 The National Association of Farm Broadcasting (NAFB) has named Gary Truitt as the 2015 Farm Broadcaster of the Year. This is the most prestigious award presented by NAFB and has recognized the top farm broadcaster in the nation every year since 1968. Truitt was presented with the award, sponsored by Syngenta Corporation, during the annual NAFB national convention in Kansas City. Truitt was chosen for his more than 30 years of service to Indiana agriculture and for founding the highly successful Hoosier Ag Today Network, now beginning its 10th year of operation on 65 radio stations in Indiana

Truitt, along with his wife Kathleen, founded Hoosier Ag Today in 2006 after feeling there was a void in providing timely information to the Indiana farm community. Since then the network has expanded to not only produce radio programming but to operate several web and mobile digital platforms, on-line video, and social media channels. This was the 2nd time Truitt has been so honored, and is the first broadcaster to receive the award more than once, first receiving the award in 1988. Two other Indiana broadcasters have been so honored, Harry Martin (1982) and Max Armstrong (2001).