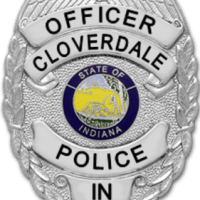 On Friday November 6th, A Cloverdale woman was arrested for fleeing from a traffic stop. According to the Cloverdale Police Department the woman was stopped at C.R. 1200 South near SR 42. The woman Donna M. Byrd, age 48, attempted to flee from police after being stopped. The pursuit started on SR 42 in Cloverdale and ended in Owen County where police detained Byrd at gunpoint after wrecking her vehicle. Police arrested Byrd for operating a vehicle while intoxicated and resisting law enforcement.