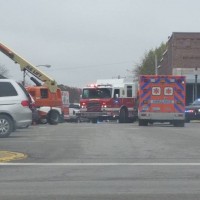 This afternoon at approximately 1pm a pedestrian was struck on the intersection of East Franklin Street and North Indiana Street near Dick’s Barber Shop. According to reports the pedestrian was hit by a pickup truck while crossing the street and was struck and trapped under the vehicle. Emergency crews quickly arrived on scene to provide assistance. The pedestrian was later air lifted to a hospital in Indianapolis for injuries sustained on the legs and head.