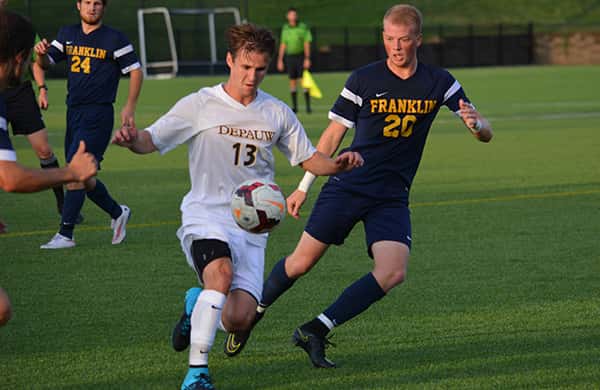 ~From depauwtigers.com
Gambier, Ohio – It took almost 100 minutes, but the men’s soccer team got it done.

The Tigers defeated top-ranked Kenyon 1-0 on Saturday to give the Lords their first loss of the season and what is sure to mix up the Division III rankings in the upcoming days.

Zach Hoffman hit the game-winning goal from the left side of the field off a throw-in 9:52 into the first overtime. It was his sixth, and biggest, goal of the year.

The win gave the Tigers’ its second upset over a ranked team. Earlier this season they defeated then No. 16 ranked Loras.

The Tigers jumped into the rankings then but dropped back out following a loss against Rose-Hulman. Following that game they played to a tie against No. 15 Thomas More.

DePauw goalkeeper Chris Yount recorded the win and the shutout with six saves. He moves to 5-1-2 on the year.

Five yellow cards were issued, including one on Hoffman, which occurred five minutes before his game winning goal.

Next, the Tigers return home to face Hiram on Saturday.