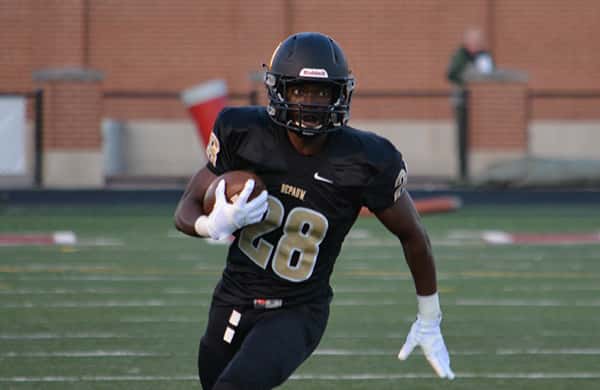 Gambier, Ohio – For the third straight game, DePauw totaled over 200 yards both on the ground and through the air and the Tigers moved to 4-0 overall and 3-0 in North Coast Athletic Conference play with a 38-16 win at Kenyon. The Lords dropped to 2-3 overall and 2-2 in the conference.

The Tigers suffered a long sack on the game’s first offensive play, were then forced to punt and the Lords took a 3-0 lead on Szabi Simo’s 24-yard field goal that capped a 17-play, 48-yard drive. Kenyon converted three third-down plays and one on fourth down during the series.

That lead would be short-lived as DePauw scored on its next six possessions starting with Matt Hunt’s 17-yard run which made it 7-3 with 3:17 left in the first. The drive was kept alive by a roughing the kicker penalty.

DePauw made it 14-3 early in the second when Hunt connected with Chase Sadler for a 12-yard score. Marko Adams booted a 34-yard field goal with 7:06 left in the half to push the lead to 17-3.

The Lords were unable to cross midfield on their next possession and DePauw drove 78 yards in 10 plays with Amen Galley scoring on a 1-yard run with 23 seconds left in the half to made it 24-3.

After DePauw’s defense notched a three-and-out on Kenyon’s opening drive of the second half, the Tigers’ offense needed just seven plays to score as Galley rushed in from 12 yards to extend the lead to 31-3 with 10:36 remaining in the third.

Kenyon’s first touchdown of the game came on the third play of the next series as Jake Bates teamed with Brian Hunca for a 79-yard score on third down. The PAT was off the mark and DePauw’s lead was trimmed to 31-9 with 9:04 remaining in the third.

DePauw responded as Jason Kirchhoff scored on a 5-yard run with 5:23 left in the third to extend the lead to 38-9. During the 11-play drive, Kirchhoff carried seven times for 31 yards.

Kenyon’s final score came early in the fourth as Bates and Hunca teamed for a 10-yard score which came just three plays after the two were part of a 42-yard pass play on the first snap of the fourth quarter.

DePauw outgained Kenyon, 474-277, as the Tigers topped 450 yards of offense for the fourth straight week and held their third opponent to less than 280 yards. The Tigers totaled 32 first downs which was just one shy of the DePauw single-game record and limited the Lords to just 12 first downs.

Kirchhoff posted his third 100-yard rushing effort of the season as he finished with 105 yards on 22 tries. Matt Hunt added 76 yards and Galley had 59. Hunt completed 18-of-23 passes for 226 yards with one touchdown and no interceptions.

Bates rushed for 45 yards on 16 tries and completed 14-of-23 passes for 203 yards with two scores and one interception. Ian Bell caught six passes totaling 49 yards, while Hunca had five grabs for 139 yards.

Will Longthorne paced the defense with 11 tackles with Thomas Gray and Philip Ganser adding eight each. Gray and Joel Kauth each had 1.5 tackles for loss with Gray and Nate Orrison each adding one sack. Zachary Reichle had the game’s lone interception.

Saxon Justice led Kenyon with 22 tackles, while Curt Williams followed with 15. Nick LaPoint had a team-high 2.0 tackles for loss and the Lords’ lone sack.