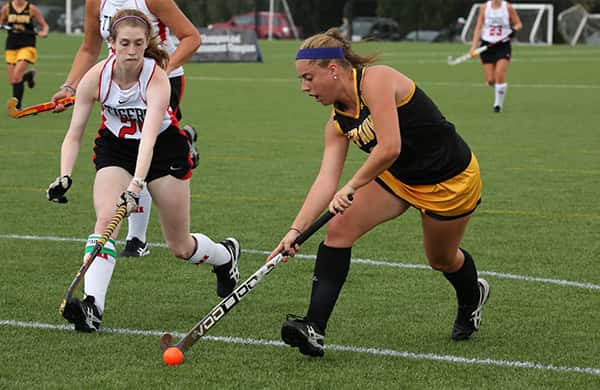 Berliner scored the first two goals of the game (12:26 and 22:19), the second with an assist from Maddy Burds, before Ohio Wesleyan spotted its first goal at 32:18.

Yet, DePauw came right back on the offensive and made it a 3-1 game 33 seconds later. Corina Bourantas scored off a rebound to give the Tigers to two-goal lead at halftime.

The Tigers expanded its lead when Reilly Bruce scored at 48:18 off an assist from Rose Revolinski on the corner. Ohio Wesleyan made it a 4-2 game five minutes later but again the lead only grew minutes later on Berliner’s third goal of the day.

Berliner now sits at eight goals on the season.

Sarah Guendert recorded four saves to pick up the win in goal.

DePauw improves to 6-3 overall and sits in second place in the NCAC at 5-1. Ohio Wesleyan drops to 5-4 overall and 3-3 in the conference.

The Tigers are back in action Wednesday night when they host Earlham.